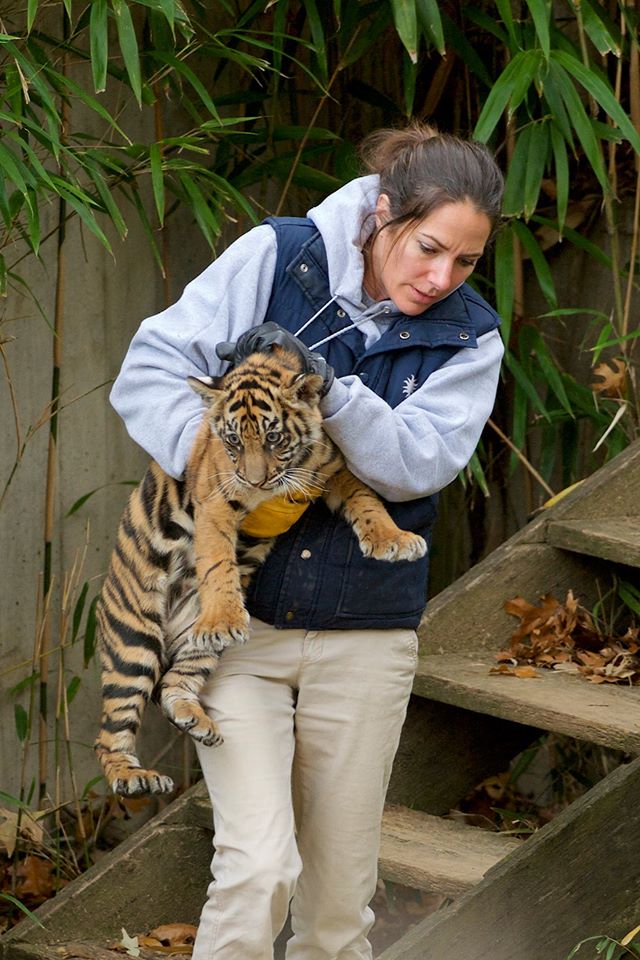 I’ve been a zookeeper for very close to 10 years, starting with birds and then moving to Great Cats & Bears, where I’ve been for 8 1/2 years. Many zookeepers would tell you that they prefer animals to people. I’m not in the most hardcore sector of this view, but man, some days test the limits of my tolerance for people. This weekend was one of those tests.

On Friday, a visitor — a grown man — climbed the safety fence around the lion yard into a planter that put him over a water moat that was part of the lion exhibit. Fortunately (?) he did this in front of me so I could scream bloody murder at him! He sheepishly said that he was retrieving his cell phone. I quickly ascertained that he was not crazy — just remarkably, inconceivably stupid. I told him that if he were to fall in, there is nothing I could do for him, and the zoo police would kill my lions in order to try to save him. After my tirade (which I kept professional — professional meaning no f-bombs in this case), I thought he would just leave the area. Nope. He followed me to my next exhibit and proceeded to engage me and apologize and worry aloud about being arrested. He hung around for the next 20 minutes at least. (A normal person would probably be so mortified at being yelled at that they would leave the area, right? Not this guy.) I ended up calling the zoo cops to check him out. Dealing with idiots occasionally is above my pay grade. A grown man at a zoo by himself is a little odd anyway…

Saturday, I was working the late shift at the Kids’ Farm. Around 5:30 pm, I saw at least 20 people of all shapes and sizes grabbing fistfuls of hay from a staff only area and throwing them in with the farm animals. There was a trail of hay from the staff only patio through the barn, and all over the cement walkway in the barn. I lost it. It was like CVS was being looted, a total melee involving random combinations of people. I kicked everyone out of the barn after yelling, “WHAT ARE YOU DOING?! Who do you think cleans this up?! ME. I have to! How inconsiderate!!” I was so angry I closed up the barn and swept as angrily as one could. We really get the lowest common denominator at our zoo sometimes. It really makes me sound like a misanthrope, but I’ve seen the worst behavior in my life at zoos. Adults and children — but I don’t blame the kids. The parents are the worst!

Sunday, I was afraid to go to work — bad things happen in threes, right? Fortunately, somewhere in the skies some stars aligned to get me through the day incident free. And fortunately, I have tomorrow off to stay out of harm’s way!

Faith, Family and My Craft Corner

My Adventures In Farm Life

I got this! I think.

One Girl and Her Cows

The ramblings of a farm-bound girl

One Family's Journey into Farm Life

Photography, Artsy Things, and Life on the Farm

The best of the literary web

Retired? No one told me!

Tonight I Dream. Tomorrow I Do!

Simple life on a little piece of land.

Writing generated from the rural life

Life on the edge of the Humber

A wildlife filmmaker in Africa